20 replies to this topic

with the performance of the motor I am quite satisfied. (60-30-10)  The titanium in the green stars has "hidden"  the effect of win20 in the beginning.  The timing of the report-ring was also not the best. (I have to build me a TF-cutter !!!

All in all it was a nice rocket, I think.


and on the seventh day, god was unhappy with the break on his finale shell, and decided to roll stars all day.

How have you been cutting your timefuse? This one didn't seem to be as snappy as some of your other shells.

How's 6-3-1 been working for you, are you milling it? I have always used a hotter mix in my BP motors.

i always cut my TF by hand. But, normaly i straighten out my timefuse before the cutting process. this time i did not

60-30-10 (unmilled ) is ok for headers up to about 300g. for bigger shells i like to use nozzleless motors. on this workhorses

i get 450g up in the air. without problems

Something I would like to work towards , I am very new at this, if you don't mind me asking:  is it a 4" canister ?  ring report with titanium what mesh ?  are your stars round or cut, break BPCRH , any additives to break, size of canulle  total weight of shell?  any pics you can share of the build process.  I enjoy all your videos !!  Thanks for the intriguing display !    I made a time fuse cutter with a 3/8 " standoff nut with bolt, one full revolution = 1/16" of fuse, with care of anivil cutter the fuse is usually within  a few 1/100th on a micrometer. I can post a pic if you like , very easy to build, just a bit of grinding on a wheel, and 3-4 dollars at the hardware store.

this pic will answer the most of your questions 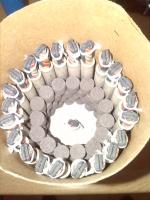 The stars you are seeing are win20. I stacked 2 rows of that green stars on top of them. I filled the middle with MCRH ( 5/1) und 3g of that "spanish" booster. That´s all

Thanks that does help a lot, Your tube rolling video was great, my tubes are coming out very well, solid and working in both core and end burner !

now we just need a tutorial keep up the good work

Unfortunately, I suspect you won't be seeing anymore anytime soon...


and on the seventh day, god was unhappy with the break on his finale shell, and decided to roll stars all day.

He has disappeared from sight, no email reply's etc.

Did something happened to him? I was wondering why he isn't posting anymore.

He seemed to fall off the face of the earth right around November 20 something. That includes YouTube (not only him uploading new videos, but also liking/commenting on others videos... something he typically did), fireworking.com (he posted on almost a daily basis, never a gap longer than a week, for an entire year. Accumulated close to 700 posts I believe. Then at the end of October vanished for a month, only to return for one or two days. After that, nobody knows. That pattern was repeated here, except that he actually had some activity in this site in the first couple days of December. Didn't post anything, just logged in.

Many have attempted to reach him through pm, YouTube and even direct email... and none of them have received any form of reply.

Considering how polite and friendly he was, I can't imagine him ignoring an email from Ned Gorski wondering if everything is alright. To my knowledge, there isn't anyone on these forums who actually knows him personally... so we're left guessing what has happened. Could be anything really... arrest, car accident, death, suicide, who knows. If it was merely him deciding to take a break or even pursue another passion, then why won't he respond to anyone? Something ain't right...

So many strangers worry about another stranger.

As I said, everything is fine. I simply had too much going on.
New work, got another daughter, etc.
The next Rocket will be coming soon

Back to Rocket Competition