54 replies to this topic

Im going to give this one a go:
http://www.amateurpy...erald-green-ti/ 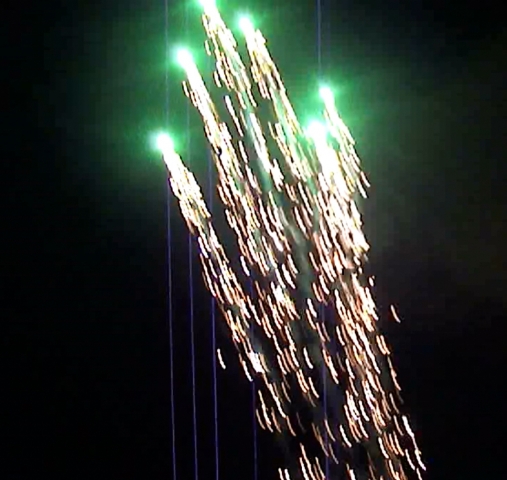 Here is my video.

I have gone through the above articles on green stars and would like to try the formula using Barium Nitrate, Magnesium and PVC/Parlon. I cannot get hold of parlon since it is used as an industrial raw material and available only in 50kg. bags. Can I use shellac or rice starch as a binder?

No, because it's main role is a chlorine donor and without it you won't get a green color. For colors you need a chlorine donor unless you are using ammonium perchlorate as the oxidizer. Parlon can also act as a binder if you use a solvent that will dissolve it like with screen sliced 'rubber' stars. But it's main role is a chlorine donor. Parlon, PVC, and saran are the most common used in pyro but dechlorane, HCB (hexachlorobenzene), HCE (hexachloroethane), and ammonium chloride are sometimes used if you can find them. In the case of ammonium chloride it is only really used in certain smoke formulas. I'm not sure why it only works in smoke but probably has to do with the decomposition temperature and the fact it isn't a fuel and won't burn with an oxidizer so it requires to much energy/heat to break down. I imagine that is why other chloride salts are never used as well, though I'm no chemist so maybe someone else can chime in. That's probably more info than you need at this point but thought I would point it out.

Where are you located? Someone may know a store that will deliver to you if we know what country you're in.

Thanks FlaMtnBkr for your reply, it was very informative. I live in Hyderabad, India. I have tried some sources who deal in Parlon, however they sell it only in bulk the same also goes for Dextrin. Since I am using PVC as a chlorine donor will that not do? alternatively is there any chemical/spirit which dissolves PVC which would also act as a binder? I also have Potassium Chlorate, can it be used as a chlorine donor?

Parlon is available in ten kg bags also. Just do a search on India mart.

Basically the only true solvent for PVC is tetrahydrofuran.  It can be cut with other things, but you need it in there to actually dissolve anything.  PVC might work as a chlorine donor, but you might need to find another binder if you can't source THF.


Just so you guys quit asking, here is the link to the old forum. http://www.xsorbit2....forum/index.cgi

The sky is my canvas, and I have 2,113 pounds of powdered paint in the workshop.

Pyrogenius007, а good source of chlorine for the stars can be chlorinated polyvinyl chloride (CPVC) for 67% Cl, it is well dissolved in saturated ketones (CH3-C (O) -CH3).It may be as binder.

The best green I've tried is Jopetes' green #2, but supposedly green #1 is a bit better. I just don't have the carbonate to make #1.

The best green I've tried is Jopetes' green #2, but supposedly green #1 is a bit better. I just don't have the carbonate to make #1.

Try looking at pottery supply centres. Here in the UK they all stock Barium Carbonate fairly cheaply and that's where I've always got mine from with no issues.

Here's a formula that doesn't need organic chlorine donor.I believe the perchlorate donates chlorine. It produces an acceptable green.
barium nitrate 10
Potassium perchlorate 4
Dextrin 3(I use boiled corn starch )
Magnesium 60 mesh 5 (I use uncoated. Spontaneous combustion doesn't take place while wetting and storing )
I live in the country where magnalium and potassium dichromate is pretty hard to buy. However Magnesium powder is quite easy to obtain.
The composition will slowly generate ammonia only when it is wet . After drying the reaction stops .The composition has a long shelf life (The batch in April 2014 is still useable )

As far as I know potassium perchlorate decomposes in KCl and oxygen. So no chlorine donor... Does this actually burns deep green ?

I haven't barium chlorate so I can't tell you if it is deep green.But the color's definitely green ,not white. Apple green and it is extremely bright.I'm not sure if magnalium can be a good substitution.

Barium Nitrate 60
Parlon 15
Mg/Al (200 mesh) 15
Dextrin 10
I didn't try the formula out myself (yet), but if someone doesn't have pvc, potassium perchlorate or red gum, it might be useful.

Try the "brilliant green rubber stars" This is the only green comp. I have ever used, I have tried a few but didn't get very good color with barium nitrate until I tried this one and decided I didn't need to test any more mixes. This is a great barium nitrate based green, the only drawback is that you must "screen slice" or cut the stars, I'm a big fan of the screen sliced method.

Here's the link to the project http://www.skylighte...rs.asp#continue

all you do is replace strontium nitrate with barium nitrate(as he says at the end) and i would also suggest trying his citron yellow variation of the composition, very interesting

Some reason's to try this comp.:
1-great color
2-stars are very bright
3-I've never been able to blow one blind, the mix burns very vigorously
4-the stars dry in around 3 hours because of the use of only solvents
5-stars are rock hard
6-stars are parlon (chlorinated rubber) based making them water resistant

you could also try:
Radiant Green Firework Star-cut with straight acetone, or roll<br style="font-family: Verdana, Geneva, Arial, Helvetica, sans-serif; ">40% Potassium perchlorate30%Barium carbonate15%Dark pyro aluminum (or any -400 mesh or smaller flake aluminum)15%Parlon or saran
(+5%) Dextrin, only if you desire to roll them, use 25% alc./water


I posted the rubber green formula to the formula database along with a few others and for some reason they never got posted, anyone have any ideas why?

Would 200mesh MgAl work with this formula?

Yes the green rubber stars work with 200 mesh magnallium, but you will find that the green they produce isn't very supperior.

I tried them this year and didn't like them at all. But i also switched back from using parlon to pvc and saran. I just don't like the sot produced while burning parlon comps.

Nothing jumps off as a true green without the parlon or PVC I see. Since all these comps require a chlorine donor, has anyone of you who posted their favorite or greenest comp tried yours with PVC. Then made it again using parlon or Saran or any other donor and came back to your compositions chlorine donor because it ''twas simply greener with that chemical?

In other words which chlorine donor is the best with greens? Not to derail this thread, just curious...

For green pvc or saran. If you use mg, use pvc with mg/al use saran over pvc.

For green pvc or saran. If you use mg, use pvc with mg/al use saran over pvc.

What is the reasoning behind this?

Perfection does not exist, but that does not mean you cannot work constantly to attain it.

The really important kind of freedom involves attention, and awareness, and discipline, and effort, and being able truly to care about other people and to sacrifice for them, over and over, in myriad petty little unsexy ways, every day. . . . The only thing that's capital-T True is that you get to decide how you're going to try to see it. You get to consciously decide what has meaning and what doesn't. . . . The trick is keeping the truth up-front in daily consciousness. -David Foster Wallace

Pvc is cheap and works really good in combination with mg, giving very brilliant color. Saran gives a color, not a brilliant (but close to). With magnallium it is the other way arround. Propably because mg/al has a lot more firce burn then the smoth burn of mg, which brakes up the molecule better.
Parlon not for the sluggish burn.

Back to Pyrotechnics Compositions