56 replies to this topic

I think von Maltitz is wrong with this thing about getting a better BP when not compressing, at least if you have really good charcoal. I still find the compressed BP superior, although it isn't bad with "pulverone" either, and it's much less work to make.

"This salt, formerly called hyperoxymuriate of potassa, is used for sundry preparations, and especially for experimental fire-works." Dr. James Cutbush

Not sure if I should be posting this here but I think it's ok. Anyway I think I have a new (well at least it's new to me) way of testing black powder.
what I did is I took a piece of pipe and pluged it and drilled a 1/8 inch fuse hole, after being pluged it is 19 inches long and 40.3 mm ID. Then I took a 39.7 mm OD ping pong ball that weighs 2.8 grams. Then I mounted the pipe on a wood plate form so that the mortar is at a 60 degree angle. fused it with black match and loaded it with 3 grams of 17 mesh black powder and the ping pong ball, and lite it. Then when it lands I simple take a measuring tape and measur how far it went(remeber I mounted it at a angle). When I did it today it went 70 feet, did it again and it went 80 feet. I know ten feet is a big differents but there was a lof of veritbale, I'll do it again soon and cut down on a lot of the veritables and see how close I can get them landing.
Well what I like about it is you don;t need much space; it doesn't make much for noise at all yeah I know thats a pro and a con; it doesn't take much bp to shoot; ping pong balls are cheap; because it doesn't go very far it's quite unlikly that you'll loose the ball; and if the ball does hit somthing it's so light it will not do anything. Of course it does have cons like if theres any wind it kind of wrecks it as far as tests go; and I can't see it being the most accurate test.
anyway just thought I'd share it with you.
Adam

Ping pong balls are way to influenced by the wind conditions, i would think golf balls in a normalized mortar would get better results.

Before the video,the ratio is 75/15/10,milled for 24H(i have a little ball mill ),the charcoal used is pine,and the bp was granulated through a kitchen screen,4mesh a think.
As you can see it remain small residues but this is not bad because i don't have shell ignitions problems

My BP for 1hour milled!

"This salt, formerly called hyperoxymuriate of potassa, is used for sundry preparations, and especially for experimental fire-works." Dr. James Cutbush

Here is mine made for Paulownia from Algenco...

The golf ball or baseball test works great except for when you lose sight of it and need to run for the nearest trees. On his website, Danny Creagan did his testing on a 3 ft piece of basically perforated angle iron with 2.5 ft. in between measuring posts. We use them sometimes to mount electrical conduit on walls and ceilings for industrial applications. The powder was about 1/4" tall in the groove. So that would be about 1/2" wide x 1/4" deep. I really enjoyed the charcoal test results and still have a copy of it in my workbook. If you haven't looked them over, you probably should check them out. That being said, I still have lots of old golf range balls that need a fitting farewell. Luckily I have no close neighbors.

I put together a short version of Dan's test chronograph using the angle iron and triggered it to time a 12" burn via a stopwatch. I'm not sure anymore which thread it's in but somewhere here in the APC forums there are videos of some burn tests.

I put together a short version of Dan's test chronograph using the angle iron and triggered it to time a 12" burn via a stopwatch. I'm not sure anymore which thread it's in but somewhere here in the APC forums there are videos of some burn tests.

That's one of the first projects once I get the new workbench squared away. Still haven't got test equipment installed or rest of the parts bins situated but it's getting close.

is it two late for me to enter this competition?

How is it that one careless match can start a forest fire,  But it takes a entire box to start a campfire?

First things first, But not necessarily in that order.

is it two late for me to enter this competition?

There currently is not any black powder competition. However if you want to know how your bp compares with other people's just post a video of it burning and we will be happy to say if it's good, bad, or ugly.
bob

After months of procrastination and just other more important stuff to do, I finally finished and tested version 3 of my BP/Fuse burn speed chronograph. The black timer box will eventually be replaced with a sports stopwatch as used in version 1 shown in above post.  Operation is identical to the vids in this thread http://www.amateurpy...rcoal-charcoal/ but instead of mechanical start/stop trips, version 3 uses flame sensors looking through Pyrex windows and is much easier to prep for repeated testing. 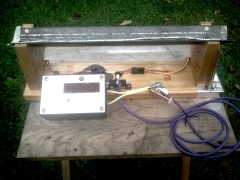 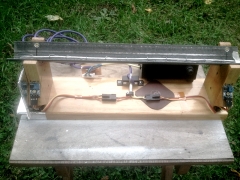 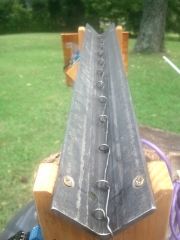 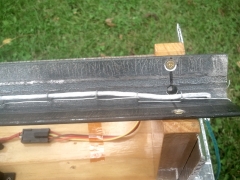 This is ok - sort of - for comparison tests, but it doesn't really tell you what you need to know. BP burns differently at atmospheric pressure and when confined, at different speeds and with different reaction products. If you need to know if it's good lift, the best way to do it is by, you know, lifting something. Golf balls are traditional, so are baseballs in a 3 inch mortar.

There were a few traditional ways to test BP. One was the "eprouvette", which looked a bit like a small flint lock pistol. The end of the barrel was covered by a small plate that rotated out of the way on a spring loaded ratchet. You loaded up with powder but no ball, moved the plate to cover the barrel and fired. The force of the escaping gas pushed the plate round on the ratchet against the spring, and you estimated the power by how far it moved. Another tester used a gun barrel hung horizontally from the end of a pendulum. The recoil swung the pendulum back and again, how far it went depended on the powder quality. For a direct reading of projectile speed, they would fire a test projectile so that it hit and broke thin copper wires various distances in front of the barrel, the time difference giving the speed. That last method strikes me as do-able by an amateur, for example firing a golf ball from a horizontal fiberglass mortar into a nest of sandbags. The time delay between breaking wires (say) 1 foot apart would be easily measurable with simple electronics. Given the speed, and knowing the weight of the ball, you could calculate back to the chamber pressure and get a really good idea of how the powder would perform under a shell.

Agreed and as you pointed out,  for simple comparative tests of BP and fuse.  It won't replace or substitute for the methods described in your post above.   Ultimately, it will have a processor and sensors to record and store environmental information such as temp and humidity.  Baseball, golfball and PVC shuttle are prone to human timing error.  If you really want to do lift height testing, you get an altitude sensor/recorder and fire a dummy shell with the sensor contained within.    The rocketry folks use such a sensor to record altitude.